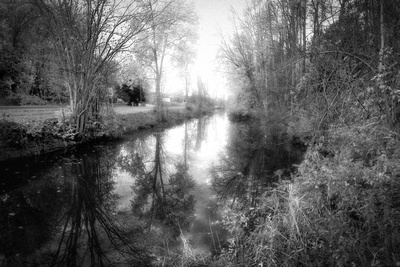 WHAT IS A GICLEE?

Are all ink jet prints “glicee?” Technically yes, you can produce a “giclee” at home, but it’s probably not a fine art print. I have to be careful here – I mean, it could be.  Quality is the name of the game. If you paid ten dollars for an on-line fulfillment of a giclee, it might look miles apart from the original. Not everyone is a master printer and there are many shades to that shadow in the printing game.

In 1991, Jack Duganne coined the term “giclee” while he worked with Graham Nash at Nash Editions. Nash has been as legendary as a photographer/printer as he was as a rock star in the 1960s band, Crosby, Stills, Nash and Young. Nash Editions originally used what was called an Iris printer, a four color injet printer. Nash and company did not want their work to look like the typical primitive product of the time. They fancied things up with a nicer name, a better process and an art paper. In an article on the origins of “giclee,’ the author explains that the term derived from a French word of gicleur (“nozzle”). Nash Editions was down the road from my school in Santa Monica where I attended class with a woman who worked there. My shooting partner always complained that her perfect assignments were made by someone else. Let’s just say that she had better resources.  One night, she brought in some examples of work from their studio. They were amazingly beautiful, printed on heavier off white or cream stock. She stated that Nash editions catered to corporate clients because their production was expensive.

I called Roger a couple of nights ago to see if he remembered her name. He barely remembered anything, but he continued all of these years later, “she cheated on her assignments.” (She did not.)

A photograph is a real print, much like a wood block print.

LIMITED EDITIONS:  The idea of editions comes from printing where a plate, stone, block, or other source was used and then destroyed. There is exclusivity in owning one of 15 versus one of 350 or an open edition of no limitation of production. Some photographers produce original prints (one of a kind) or offer exclusive licensing (use by one licensee).

I limit my prints to a run of 15 prints.  Earlier prints are not always numbered on the print, but production started early enough to know what and where the print was produced.

WHAT’S ARCHIVAL?  It supposedly means that something will last 100 years. Marketing now pushes it to 200 years. The first time I heard the term, my instructor pointed me to the toxic selenium bath in the dark room and told me that if I dropped my print into the solution, it would last 100 years.

Papers and any material touching the paper must be acid free in order to be considered archival. My production (digital, not darkroom) meets the standards of acid free or coated, classified and accepted as acid free.

Canon has 100+ years’ dye based ink. They state that if you leave the print away from sunlight, it will last 100+ years. I have heard it said that it lasts 30 years.  I’ve exposed a dye print to direct sunlight for a year through a window with no consequence, but this all becomes subjective.

Pigment Ink is archival. I print with pigment inks.  My prints are secured with linen tape.

BEST PRACTICE:  Photographs, art prints, watercolors should not be hung in your home where they would receive direct sunlight or they will fade.

Framing can be done with a print behind UV protected Plexiglass and it’s costly. I replace glass in frames with plexi that is not UV protected.

Prints can be sprayed with a UV protection spray. There are varying degrees of quality. Two top makers are also top art paper producers: Moab and Hanemuhle. I use Moab Desert Lacquer.

PAPER AND Matting    Red River papers rival Hanemuhle, Moab and Canson in quality and are highly rated. Mats can be pre-cut in standard sizes or hand cut either by the artist or by a framer. The framer will have fancier machines with better accuracy.

With respect to hand cut mats, you are likely to find pencil marks on the inside. With my prints, you might find lots of pencil marks.

Framers have been known to seal mats with double sided tape or rubber cement (which is archival) and some of my mats are sealed, but my practice has been changing to using a hinged mat. A framer will open a sealed mat with a tool that looks like a large flat spatula, but don’t try this at home.

Some matting practices leave enough edge around the print to show the paper used through the frame window. Often in this instance, the artist’s signature shows. “Old school” taught us to sign the mat. Other schools of thought teach that the print should be signed in pencil or where pencil Is not practical, to use an archival permanent pen. Some artists sign the back of the mat or the inside of the mat instead of the picture. If the signature is inside of the mat and you want a visible signature, I will be happy to sign the mat with my name and the edition number.

Other options for framing are windowless dry mounting on a backing board.

Brown craft paper at the back of a frame is not archival, but is not touching the print. It serves as a dust cover. There are other forms of backing paper which are archival. While a dust cover is a good practice, it’s not always a good choice when selling prints to customers who might be walking around with a print since the paper can tear and the purpose of a dust cover is defeated. If dust gets into a frame – and it often does – the backing has to be removed to get inside. It looks nice. It serves a purpose, up to a point. Prints in metal frames are pushed tightly against the glass and wouldn’t require a dust cover. Adding bumpers to the corners of the frame protect the walls from the frame.

Prints/framing should never be backed or secured with brown cardboard. If the frame comes with a composite backing, you might want to dump that out in favor of a piece of gator board. Wood backing, found on antique pieces, will eat up a print over time and so if you have any wood backed or cardboard backed family photos or prints in your home, you might want to get it changed out to preserve the print.

FRAMES: Framing is expensive! As an example, I had three 8x10 frames made by a framer and the ticket came to $200. The frames don’t look like much at all, but the wood is finer. When they were in the gallery show and I wanted to capture the cost of the art and the frame and the gallery’s commission on print plus frame, sticker shock scared off buyers. As a general rule, I try to keep the cost factor of frames down when I use one. The cost I pass on for frame and framing materials will be minimal with a very small if at all margin. The positive aspect of selling a framed print is that the consumer can immediately see how a photograph presents in a frame. It is then their choice to take it as they found it to hang it or put the work into their own frame. I sell unframed pieces as well.

CARE: My framed prints are behind plexiglass, not UV plexi which would raise the price significantly. The matte prints, in particular, are sprayed with UV protective spray.

Plexi is not cleaned with Windex and paper towels. Please use a soft cloth. You might consider using a plexi spray cleaner such as Novus Plastic Clean, Brillianize, Castle Plexo, etc.

Don’t try this at home:

I had an experience with a former friend who ran her fingernail across a matte  paper print and then complained that my work was not worthy. I called the paper company and asked them what was wrong with their paper. They were dumbfounded. At their request, I mailed the print in so they could examine it.

They concluded what I already knew:

With any print, there are certain tests of use or abuse that would not apply to a piece of art.

I grew up in Central New York and moved away when I was young. I lived in Los Angeles for 45 years and moved back in 2014. I was educated as a fine artist (painting, drawing, etc) and went to school for photography in Santa Monica. Later, I spent years with a professional photographer mentor. I had a career in photography, but turned back towards art so that I could shoot for myself.

I am not a train aficionado. There are greater ones in that arena. My love of trains didn’t start out as a “love” of trains. My father was killed by one and I walked down the tracks after it happened – hence the need to leave CNY and live in other places. After my father’s accident, my grades took a nose dive. I was 14 years old. In the old days, guidance counselors gave out one of two options: home economics or art.  Art was the therapy route in their thinking and I was encouraged to explore my options as an art major. It was a good landing spot. In California, I was stuck with a shooting partner who was a train chaser or as they like to be known, a “rail fan.”  If we were driving out on a school assignment, we spent half the night and much of the day looking for railroad tracks.

In January 2021, one of my good friends, another train photographer, passed away. A few months later, someone really close to me passed away. I stepped back and changed my curtains, cleaned the mess in the back room and did things which I didn’t know why I was doing them. I changed my photography. More recent work is done in black and white. The journey to black and white put me in touch with something that was going on inside of me and perhaps influenced by my losses – seeing them in my dreams, seeing how we all see people and things in our dreams. We dream in black and white much of the time and usually in soft focus because we are seeing with our spirit instead of our eyes. I have been influenced by the Pictorialists and gravitated to their use of soft focus and impressionism. I am embracing that life is seen, unseen and things in between, haunted by fears, superstition and darkness and there is always a path that takes us where we would be going.

I changed my name to R. Wallace Wilson in my train days. As I get closer to being archival, myself, I took back my birth name.