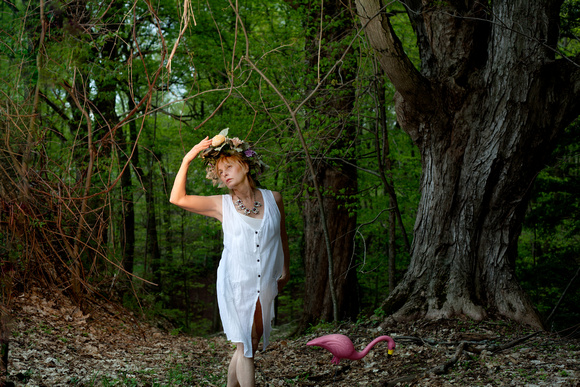 Sitting around after dinner – someone serves coffee and pours port wine. Conversation brings us intimately together when one person initiates an idea in a room filled with nothing more than candlelight at the table.

"Out of Africa," the movie:

Meryl Streep portraying Karen von Blixen, and her husband, Bror (Klaus Brandauer) invite Denys (Robert Redford) to dinner. After their meal, Denys brings up the word, “foot,” and finds no rhyme for it. Karen comes up with a beautifully simple and artful verse. In response to that, Denys challenges her to create a story.

Karen announces that whenever she tells stories at home to her nieces, one of them always provides the first sentence.

The two gentlemen think for a moment and then Denys starts his sentence about a wandering Chinese man named Cheng Huan living in Limehouse and a girl named Shirley.”

Karen thinks for a moment, turns her gaze backward and then whets her lips as she completes the sentence, “… who spoke perfect Chinese which she learned from her missionary parents.”

"Cheng Huan lived on Formosa Street in a room above the Blue Lantern. … and in his poor listening heart, [he heard] strange echoes...

The music takes over the audio stream as we remain fixed on Karen. The setting transforms from a candle to the flames in a fireplace in a different setting where the listeners sip brandy as they listen to Karen's tale. The story she tells comes to a tragic end, most of which you didn’t hear over the music score.

If you had not already sensed and fallen in love with the characters in the parallel story of Karen, Denys and Bror, you would have done so by the end of the Cheng Huan story. There was no blatant sexual tension.  It was poetic and much was left to your imagination.

If only any of us could experience a beautiful, epic life as any created in a Sydney Pollack movie. Perhaps on some level we do have that experience, but we haven't found our vehicle for it.

Regrettably, the dinner tale was lifted from another story found in a small book, “Limehouse Nights,” with the addition of Shirley, but for heaven’s sake, don’t consider it a spoiler. If you knew that, you might complain that you knew too much, but you didn't know why Denys thought of it.

I believe that when you get to a certain point in your own saga, your spirit spills out of your heart, bringing back certain memories or giving you a parallel tale.

The impact in what you experience will live with you for a while. I believe that is how you, the receiver of art, complete another's artistic vision. You participate in tandem with the artist.

The scene from this movie has lived in my brain since the release of the film when I sat in the theater squeezing the hand of my dearly departed husband as the popcorn spilled under my seat. My wish has always been that I could tell a story in the same fashion as Karen.

I would love to write and at times I may put some effort into it, but my world is visual. I want you to bring your story to my images.  If I write a story or if I don't, my images will always be an opening sentence to your own imagination.